3 October 2001 – Bogota’s Gold Museum showcases more than 32,000 pieces of pre-Columbian ceremonial and functional gold items, as well as pottery, textiles, emeralds, semi-precious beads and silver. A short music and light show, inside a small, circular room, spotlighting thousands of pieces of gold sounds contrived, but I enjoyed the tranquil music and gold display so much that I stayed for a second show. The organized museum, documented completely in Spanish, with some English explanations, as well as for-hire English-speaking guides, is a must if one is in Bogota.

Later, while walking around Parque Santander, right outside the Gold Museum, I saw that life in Bogota operates as it does in any thriving city in the world despite the civil unrest with FARC, kidnappings and assassinations. Standing here, I realized that it was highly unlikely that someone was going to snatch me for ransom! Jim jokes that the kidnappers would give me back within a day…

We also visited the Emerald Exchange Center, chock-a-block full of emerald shops – no less than 30. Most of the shops’ displays spotlighted small, not very expensive pale, or crystal-like, green stones mined in Colombia. The good stuff tends to come from the scores of dealers socializing in the hallway. These jewelry-wearing, mostly heavy-set men carry the quality and larger stones, wrapped in white paper, a bit thicker than tissue paper, deep in their pants’ pockets. We caused quite a stir when we expressed an interest in a five-carat, square-cut emerald. I mentioned the poor clarity and our desire for a higher-quality better stone, which led five or six dealers to dig in their pockets pulling out “the best” stones. But again, none were without obvious internal flaws, so we left the eager group of hustlers.

We moved on to Plaza Bolivar, where yet another statue of Simon Bolivar commands the center of a public space. The 19th century Catedral is on the plaza, but the Church of Maria del Carmen, just a few blocks away, genuinely captivated me. This red-and-white-banded structure reminded me of an ornate, and enormous, doll’s house on the exterior, simply due to the stripping, although the detailed religious carvings and ambitious steeples certainly added a seriousness to this structure. Inside, though, is where I found myself nearly breathless from the sheer beauty, perfection and decadence of this church. Enormous marble-based columns – also in red and white – support the structure. Colorful stained glass graces scores of windows and the ceiling is spotted with painted designs and delicate angels. The tile floor, massive oil paintings and enormous sculptures add to the splendor of this religious hall, as does the mahogany-looking pulpit – as beautifully carved as any I’ve seen. As expected, the main altar, with gold and gilt, glittered and sparkled. The wooden pews were ancient and obviously worn, but polished and protected from decay. This church is perhaps in the best condition of any 19th century one we’ve visited. Soft music played as we eyed the details of this well-preserved gem, where I felt awed and inspired.

Later that evening on our drive to dinner, Jim and I noticed soldiers with machine guns posted every 10 meters along a main boulevard. We supposed someone important would travel this stretch and the security aimed to keep kidnappers and assassins at bay. Even though Bogota hustles and bustles, and we were able to have an extremely satisfying tourist-friendly day – bomb sniffing dogs and armed security officers guard the entrance to many buildings, people with money and power travel via armored cars, and many chauffeurs sport US$400 bullet proof vests. No doubt, FARC is real. But, if, or when, the problems involving FARC disappear, Bogota will be a near perfect place to live. 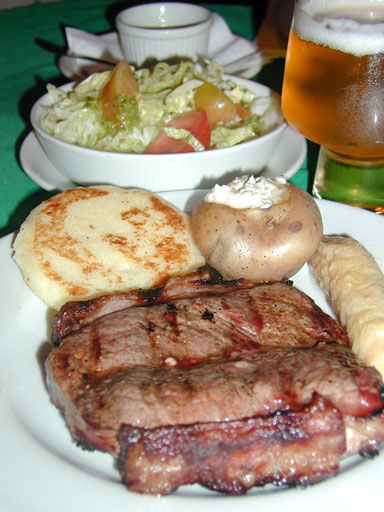 My enormous meal at Carbon de Palo included a m... 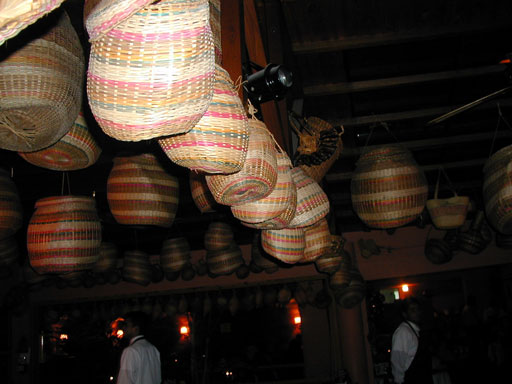 The interior of Carbon de Palo is decorated wit... 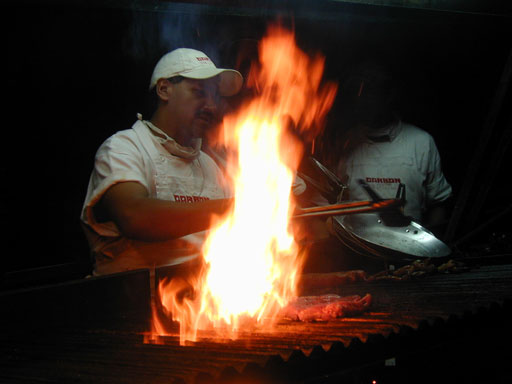 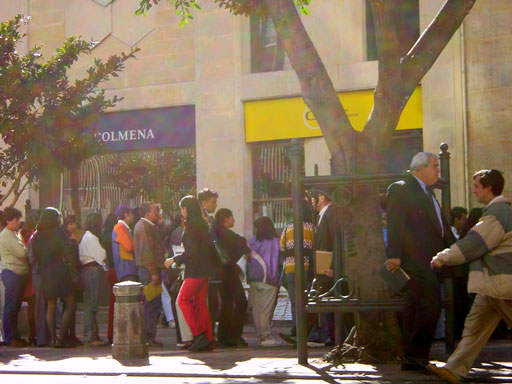 More than 50 people queue up for their Colombia... 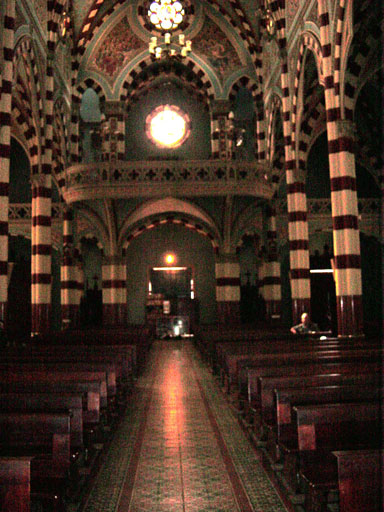 Jim sits at right inside the stunning Church of...

The main altar of Church of Maria del Carmen sh... 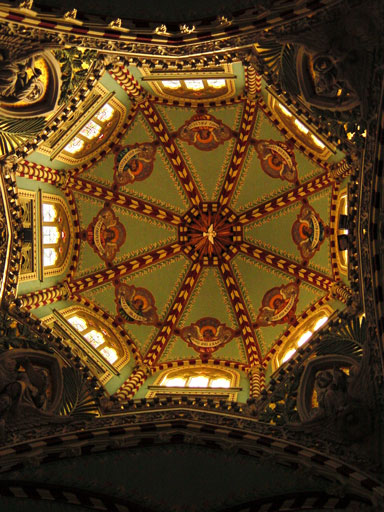 Ceiling of angels in the Church of Maria del Ca... 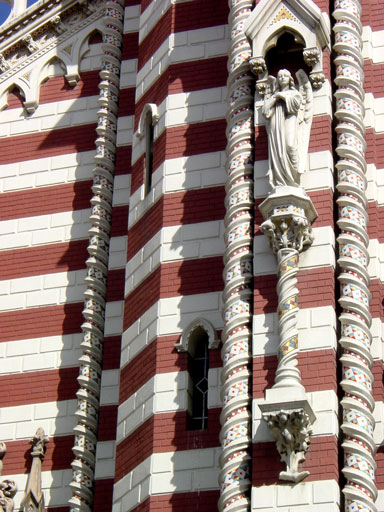 An angel on the striking red and white Church o... 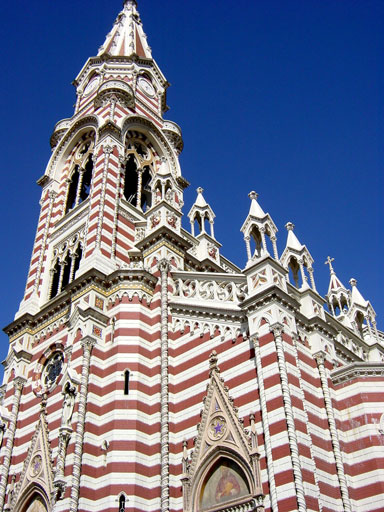 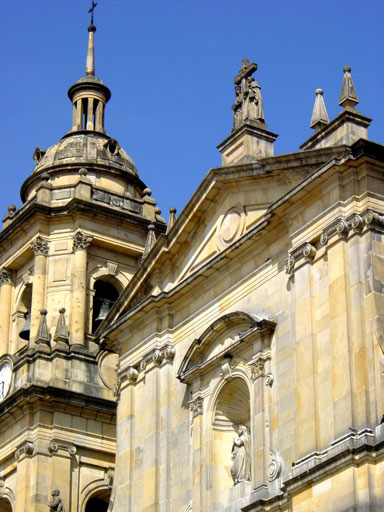 Details of the Cathedral 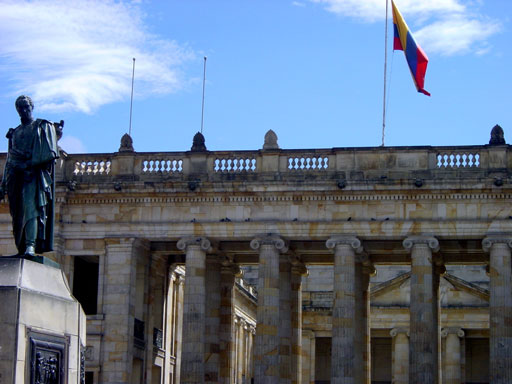 Simon Bolivar stands at the center of Plaza Bol... 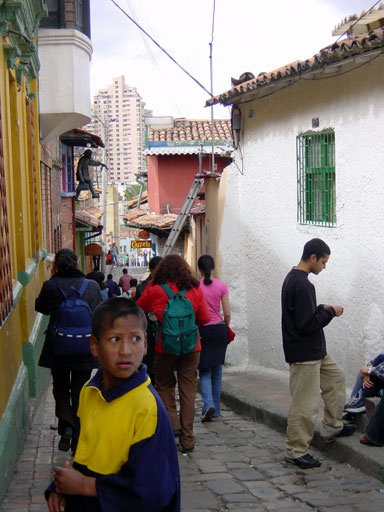 The oldest street in Bogota, built when narrow ... 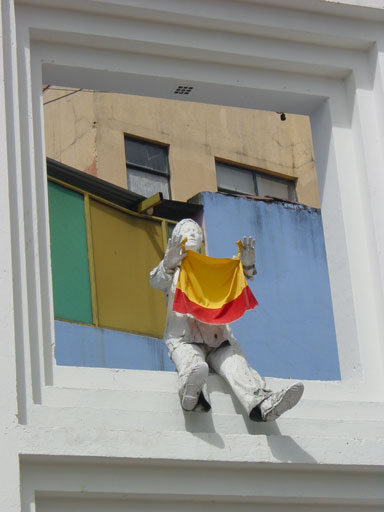 Public art in a window 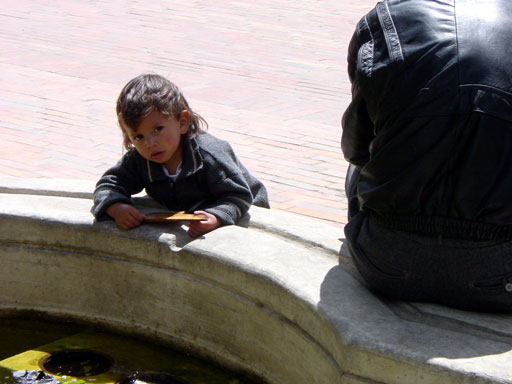 Playing with a piece of wood in a forgotten fou... 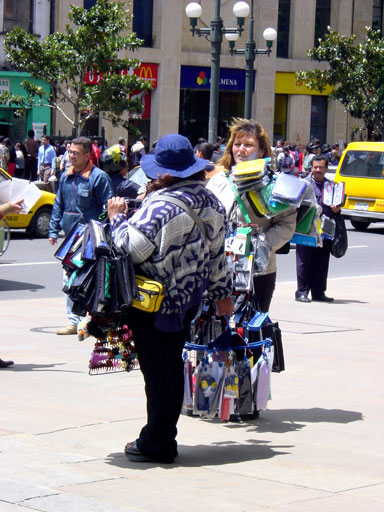 Two women carry massive loads of goods they are... 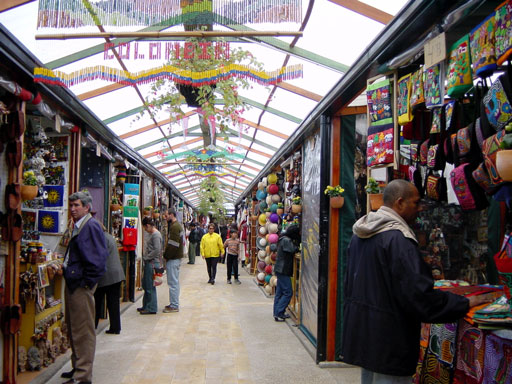 Tourists shops are abundant in Bogota – even ... 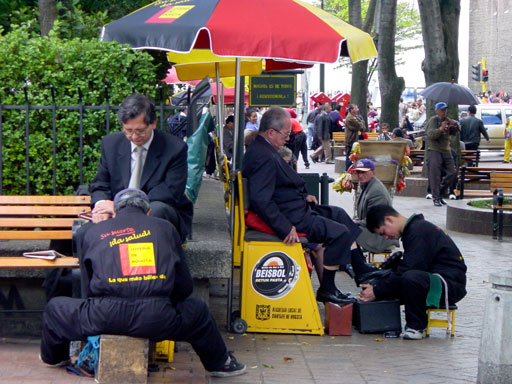 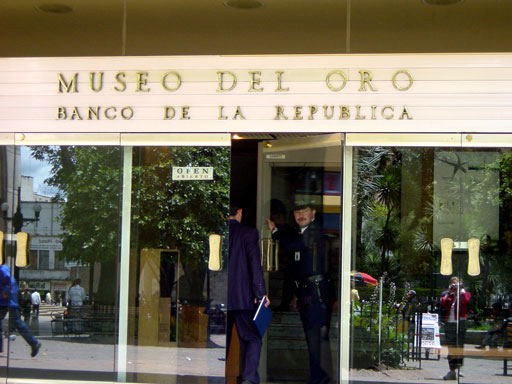 The Gold Museum in Bogota showcases more than 3...